This is a reblog of a post I wrote for #culturalvalue initiative which was first published on 2nd September 2014.

This was Eleonora Belfiore’s introduction…

Our regular contributor Stephen Pritchard has kindly agreed to review for The #culturalvalue initiative ‘Evaluation Survey of Artists’, a recent report by ArtWorks, one of the Paul Hamlyn’s Foundation’s Special Initiatives. The Foundation clearly has great ambitions for this project, whose web page states boldly: ‘This Special Initiative is an important intervention that will cause a paradigm shift in the way participatory work is viewed’. The report, and indeed Stephen’s post are therefore focused on the value that is attributed (or, as the case might be is not) to artistic practice that is participatory in nature and focused on fostering personal and social change, and – consequently – on the value that is attached to those artists who focus on this type of work. Because of the legacy of New Labour’s focus on the arts as a means to help deliver on socio-economic agendas, the question of the value of participatory art work with communities is often charged with accusations of ‘instrumentalism’, and the fear (that Stephen shares) is then that the artists might become hired hands charged with the delivery of soft social engineering and the kind of faux-radical type of community engagement that ensures that the fabric of society and the relations of power that govern it remain unchanged. Yet, the most interesting fact to emerge from the data in the ArtsWork report is, in my view, the sense that it is not just policy makers and funders who might fail to appreciate the value participatory arts (a complaint that is almost as old as this form of creative practice itself), but that other creative professionals in other corners of the cultural ecosystem might share in that lack of recognition and appreciation for participatory arts: struggles over cultural value, status and recognition of professional practice clearly are not limited to the arena of the competition for resources but extend to struggles over cultural authority and value amongst creative practitioners themselves.

Paul Hamlyn Foundation created the special initiative, ArtWorks: Developing Practice in Participatory Settings, in 2010 to ‘support the continuing professional development of artists’ (Paul Hamlyn Foundation, 2014).  A ‘workforce scheme’, the project is funded and supported by the Arts and Humanities Research Council, Creativity Culture & Education (supported by Arts Council England) and the Cultural Leadership Programme (ibid.).  In the words of PHF, this ‘important intervention’ is designed to ‘cause a paradigm shift in the way participatory work is viewed’, producing ‘enhanced quality and deeper understanding of what is required from artists in generating successful participatory projects’ (ibid).  There are five ArtWorks Pathfinders, each with a differently focused action research project.  The initiative ends in 2015.  In June 2014, the foundation published ArtWorks Evaluation Survey of Artists, the first of several reports emanating from their extensive ‘conversation’ with and about participatory arts.

This post looks at how elements of the report relate to both my socially engaged practice as well as my current doctoral research project.  I’ve followed the ArtWorks initiative with interest since it started.  I attended their Changing the Conversation conference in 2013, thanks to a bursary from them.  Several of their previous reports and provocations are referenced in my doctoral research literature review.  I’m presenting, PechaKucha-style, at the ArtWorks North East Conference entitled, Pilots to Practice – learning approaches for artists working in participatory settings at BALTIC in September 2014.  I took part in this research.  Why mention all this?  Well, I thought I should put my cards on the table.  The cards say: Be critical; take part.  Why am I critical?  The field of social practice/ community arts/ participatory arts/ etc. is a broad church.  Today, artists producing children’s workshops for major institutions form one node, radical activists another.  There are many nodes in the field.  For some people in the art world, much, if not all, of social practice is not art.  I like tension and dissensus.  Social practice offers plenty.  This is good.  I like DIY (or more precisely, Do It With Others); the commons; alternative forms of democratic society.  Some elements of social practice produce these things and more in abundance.  But much of the field is driven by instrumentalism, agendas designed to use ‘participatory art’ as a tool of soft state power and a means of obtaining increased government funding by ticking ‘engaging new audiences/ publics’ boxes – participatory art as a panacea for all life’s ills.  This is neoliberal social change – not social justice.  This is about maintaining, evening deepening, elitism and age-old institutional status quos within the arts – not a paradigm-shift.

Anyway, the report is detailed and interesting and has received a reasonable amount of attention in the arts media, so it’s worth digging into some of the discourse around the data.  Having read the report, four questions sprung to mind:

The research was conducted over a short period early in 2014 and had a reasonably large core sample size of 868 respondents.  The questionnaire was thorough and the data is undoubtedly well presented.  I recommend that anyone interested in finding out more about the breadth of artists working in the field in the UK at present take a look at the report.  It makes for fascinating reading which, for a practitioner working in the field, like me, feels very familiar.  But what about my questions?

As I mentioned, there have been several responses to the report for other institutions.  For example arts in criminal justice settings organisation, Arts Alliance, focused on the report’s findings that socially engaged artists often felt their work was undervalued and misunderstood within the arts, often received informal training and worked in ways that, and with commissioners who, regularly ignored standards and codes of practice.  They pointed out that only one percent of socially engaged artists worked within criminal justice.  Arts Professional’s headline was that socially engaged art is undervalued, accompanied by the rather strange (given the data) that ‘Artists urge employers and commissioners to invest more in their professional development’.  Their report did not actually discuss the claim made in the strapline in particular detail, however.  Social media, especially Twitter, responded (in general) very positively to the publication of ArtWorks’ report.

PHF in their July 2014 Briefing reported many of the headline statistics from their report and included a comment by ArtWorks Project Director, Dr Susanne Burns.  In her comment, Burns pointed out that almost half of the survey respondents earned more than half their income from socially engaged practice, describing the practice as ‘a significant area of work generating major economic value for artists’.  Much of her commentary centred on the need for better training, CPD, space for reflection, investment, etc.  Her conclusion is worth quoting at length:

Work in participatory settings is valid practice in its own right. It constitutes a major element of many artists’ portfolios and affects the lives of many people across many areas of life. The status of the work must be raised. We must work together to ensure that its economic contribution, as well as its social value, is recognised and that the artists who undertake this work are supported to be the best they can be at all stages of their careers.

There is little to argue with here.  Social practice is a major part of many artists’ creative activities and, increasingly, an essential way of earning a living whilst not getting paid anything/ enough when exhibiting their work.  This is an area I believe that A-N’s #PayingArtists campaign needs to urgently address.  The motives for some artists currently working within ‘participatory settings’ and the intentions behind instrumentalist projects such as Arts Council England’s Creative People and Places may, perhaps, be suspect on occasions – this is, however, another discussion for another day.  The data quite clearly shows that socially engaged artists feel undervalued.  This is unsurprising, given that the field is often belittled by many in the elite arts establishment.  The data illustrates how artists feel that they are not understood by commissioners, nor given enough time to plan properly, nor listened to/ involved enough.  For me, this relates to many personal experiences in which commissioners do not really know what you do, why you are doing it or what they really want to achieve from the commission.  They are more interested in targets, outcomes, numbers, boxes ticked and nice photographs for their websites.  This is not their fault.  This is symptomatic of an evaluation-based culture seeking to provide instrumental results rather than participant experience.

The question of developing courses and degrees and career development opportunities for future socially engaged artists and CPD, standards of practice and formal qualifications for existing practitioners is, for me, something I’m rather sceptical of.  I believe that constantly reflective and reflexive individual practice, married with ‘being the right type of person’ to work in the field, and a person-centred, organic, non-expert approach to learning from people is essential.  I don’t believe this can be taught.  Nonetheless, I fully understand why initiatives such as this and FE providers are keen to exploit the field as a potential source of new earnings and funding.  Attempts to standardise or certify socially engaged artists or to produce ‘toolkits’ will, for me, always be likely to fail; always represent creeping instrumentalism.

So, my overall feeling about ArtWorks Evaluation Survey of Artists is that it contains excellent data that doesn’t indicate a great demand for the field to be formalised or institutionalised but rather stimulates further debate about examining and mapping the field in much greater detail and exposing the multitude of individual practices both working with and against the state in its insidious drive to promote ‘participation for all’.  At present, socially engaged art is not recognised by Arts Council England or many other major institutions.  It has a long history and is often inherently interdisciplinary – not ‘just art’.  Many artists work in the field; many collectives, cooperatives, even constituted organisations, exist for socially engaged art; even (‘non-artist’) activists make socially engaged art.  My feeling is that social practice should be recognised as a valid, varied and independent mode of art-making that should be recognised by ACE and others as separate from other art forms – not classified as part of a generic ‘Cross-art form’ category.  This does not mean the field should be institutionalised or professionalised.  Much of it already is… 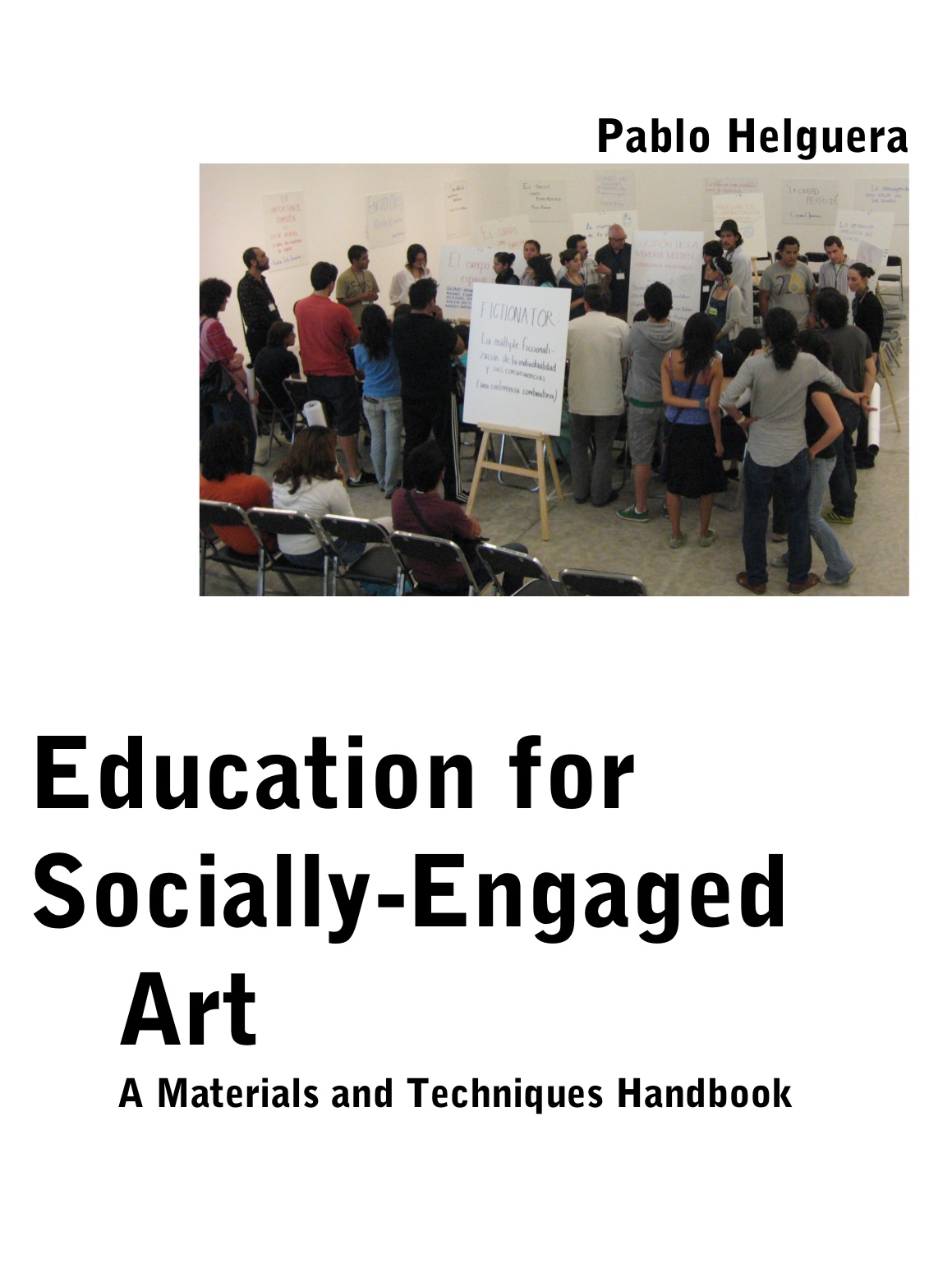 Stephen Pritchard is an art historian, participatory arts maker, curator and writer with a background in critical literary studies.  He has previously worked in textiles design and manufacture, international business management, quality systems design, and the contemporary arts.  He describes himself as a participatory arts evangelist who’s made many a pact with many devil and that is what he likes – but this is probably not true.  He’s toying with the idea of redefining himself as a gamekeeper-turned-poacher but this will more than likely come to nothing.  His favourite number is zero.